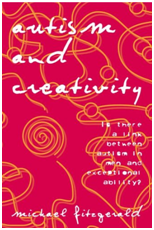 Autism and Creativity is a stimulating study of male creativity and autism, arguing that a major genetic endowment is a prerequisite of genius, and that cultural and environmental factors are less significant than has often been claimed.
Chapters on the diagnosis and psychology of autism set the scene for a detailed examination of a number of important historical figures.
English Language Edition
Author: Fitzgerald M.  (2004)
Publisher: Brunner Routledge:  New York
ISBN: 978-1583912133
Link to this book
For example:
* in the Indian mathematician Ramanujan, the classic traits of Asperger’s syndrome are shown to have coexisted with an extraordinary level of creativity –
* more unexpectedly, from the fields of philosophy, politics and literature, scrutiny of Ludwig Wittgenstein, Sir Keith Joseph, Eamon de Valera, Lewis Carroll and William Butler Yeats reveals classical autistic features.

Autism and Creativity will prove fascinating reading not only for professionals and students in the field of autism and Asperger’s syndrome, but for anyone wanting to know how individuals presenting autistic features have on many occasions changed the way we understand society. This is quite simply the best book I have read on autism in history . . .

“Fitzgerald is clearly an experienced clinician and his deep understanding of the spectrum of autism conditions comes across in his writings. But he is also an exceptional scholar, and the thoroughness of his biographical research combined with his clinical acumen minimises the obvious risks inherent in historical  diagnosis. He makes a plausible case for the Autistic mind being a different – and potentially highly creative – kind of mind“.

Michael Fitzgerald was the Henry Marsh Professor of Child and Adolescent Psychiatry at Trinity College, Dublin. He is the first professor of child and adolescent psychiatry in Ireland. He was the first Professor of Child Psychiatry in Ireland in 1996. A Clinical and Research Consultant to the Irish Society for Autism and an Honorary member of the Northern Ireland Institute of Human Relations. He has a doctorate in the area of autism and has been a researcher in this area since 1973. He trained at St. Patrick’s Hospital Dublin, Chicago Medical School, and The Maudsley Hospital and the National Hospital for Nervous Diseases in London. He has clinically diagnosed over 2600 individuals with Autism and Asperger’s syndrome and has served on the Government Task Force on Autism and the family as well as similar task forces for the Department of Health in Northern Ireland. He has contributed to National and International Journals on autism another relevant topics. He has written, co –written, edited or co-edited over 24 books.. Read more